The Red Talker of the Amazon - The Scarlet Macaw 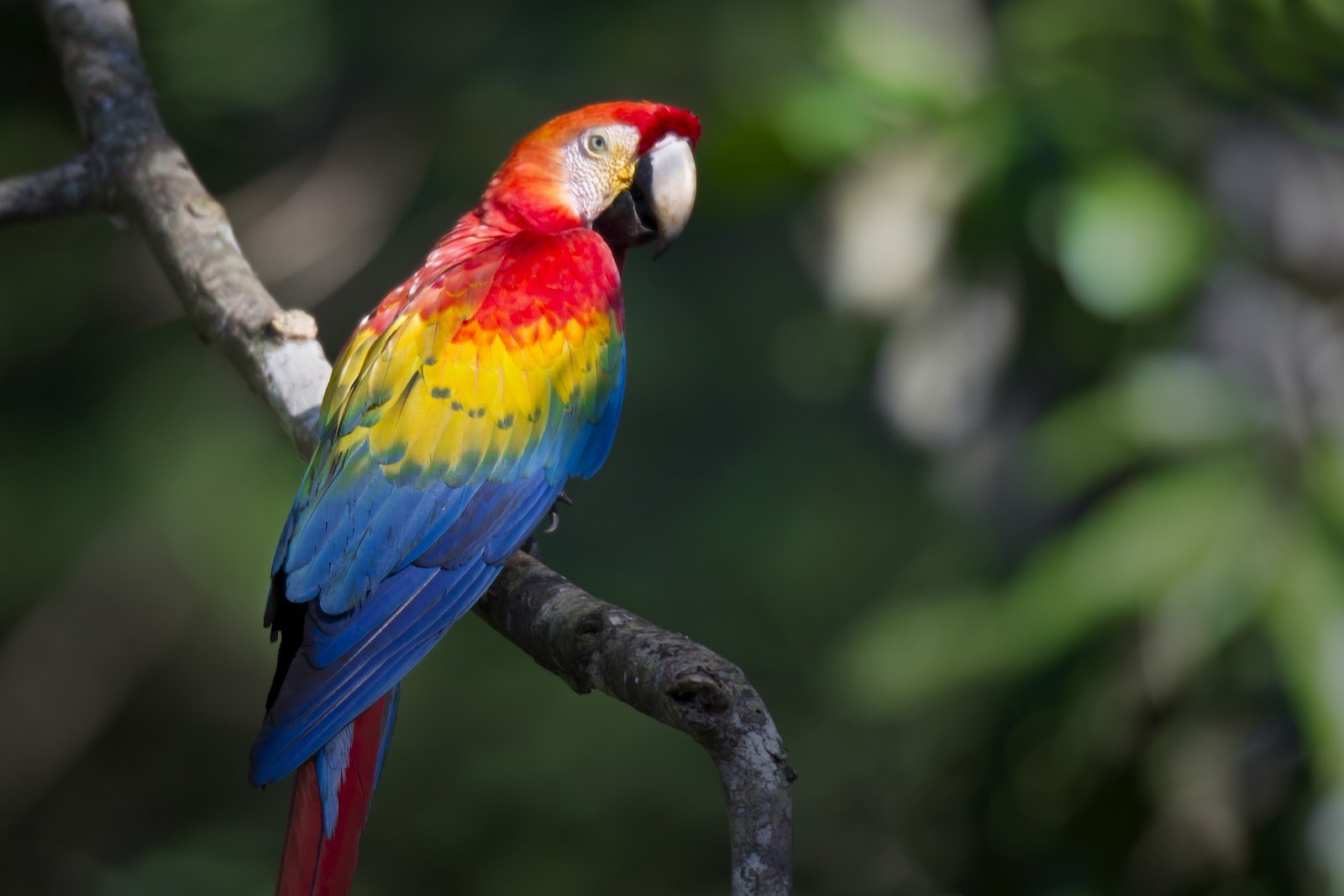 When you ask someone to picture out a parrot, they will immediately think of a red bird with rainbows for wings, right? That is because the Scarlett Macaw is the most recognized parrot breed in the world. There is nothing more flashier than this bird and is one of the most common picks for bird fanciers and novice breeders alike. It is not unusual for other people that their introduction to the wonderful world of pet birds started first in owning their very first Scarlett Macaw (thought this magnificent bird is not a great choice for newbies due to its high maintenance).

This grandiose bird varies in sizes from 80 to a hundred cm in length, and, as its name suggest, is primarily scarlet in color. With a band of yellow in the center of its wings, followed by a band of blue leading to the tips of their flight feathers. In some other birds, there is also a visible green band between the yellow and blue bands on their wings.

This beautiful, yet high-maintenance pet bird requires an experienced bird owner, or someone who is very dedicated into learning about them, and providing the appropriate environment and care for this magnificent parrot (even to the point of bankruptcy). In the wild, macaws are used to “modifying” their environment, that is by chewing on branches and creating a nest to raise their chicks. For domestic Scarlet macaws (who are used to be with a human companion than to be in the wild) , they will continue to chew and explore (of course, with their beak) anything around them that gets their attention or piques their curiosity. Training your scarlet macaw is the key to assimilate them into the family, and establish decent behavior.

Scarlet macaws live a long life, living for approximately 40 to 50 years and there are even some reports that the can reach up to 80 years. So owning a scarlet macaw is not just like owning other pets like dogs or cats (which have an average of 15 to 20 years lifespan), this is a pet “for life”, and they even may outlive you. (one you got yourself a Scarlet macaw, you are tied to it FOR LIFE!)

Origins and Current Status in the Wild 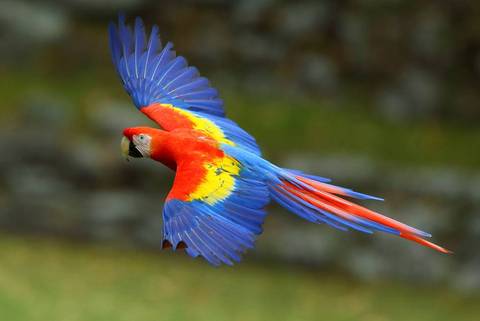 Scarlet macaws (Scientific name: Ara macao), just like other common medium-sized parrot breeds, are native to the dense rainforests and jungles of Central and South America.

This unique macaw has two subspecies;

which is endemic in Central America, primarily from the countries of Belize, Guatemala, Panama, Mexico, and Nicaragua; and

which originates in South America, that includes the countries of Brazil, Colombia, Ecuador, French Guiana, Peru, Suriname, and Venezuela.

With such beauty, there is a great price to pay. Scarlet macaws are rarely seen in the wild, due to losing their habitat and excessive capture for the pet trade. Luckily, local authorities and environmental organizations, together with local nature advocates (especially in countries like Costa Rica and other South American countries), are doing all their best to bring back the original population of these colorful birds in the wild by breeding them in captivity and reintroducing them back in the wild after reaching the age of maturity.

Aside from this, government units of most Central and South American countries passed laws that heavily punishes whoever caught in the act (or is suspected) of smuggling and participating in the illegal pet trade of these exotic birds (some people would pay thousands just to have one scarlet macaw) . Other factors that affect their dwindling number in the wild includes deforestation, trapping for food and feathers, and spraying pesticides (which are highly toxic to them) on nearby fields and plantations. 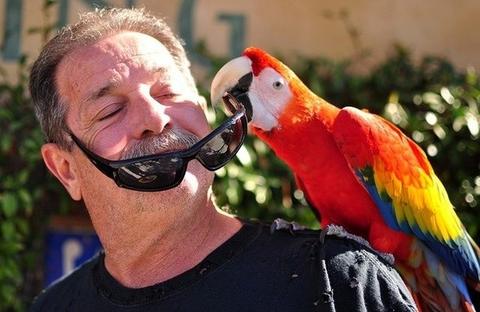 Aside from their gorgeous looks, The scarlet macaw is also known to be “sassy” bird, filled with vigor and character. It is a very smart bird and is known to open hinges of their cage in order to escape.

Sometimes, scarlet macaws tend to be very choosy on particular things and might get attached to only one person (usually the person who raised him, feeds him and gives him the most attention) and may shun other people around him (or even bite them if they try to get near him or his “human”).

To avoid this, it is ideal to train your scarlet macaw to recognize other people around the house when it was still young.

If talking about intelligence then the scarlet macaw is gonna be on the top 3 smartest birds in the world. When in captivity and on the hands of a capable owner or trainer, scarlet macaws are able to mimic words and sounds and learn tricks, from the basic ones even to the most complicated of tasks, and they are even a staple in pretty much any pet bird shows in zoos worldwide. 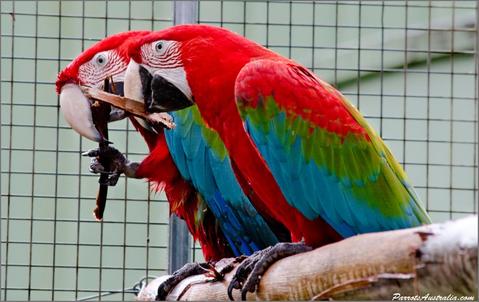 They are also smart enough to distinguish colors and shapes (of course, with the guide of a capable trainer) and some of these birds are able to solve simple math problems.

Scarlet macaws takes pleasure in being an essential part of their human and animal family, anxiously fitting in on pretty much anything they do. Adaptable and extremely easy to live with, they are not immune from becoming spoiled, which may lead to squawking or biting for their owner’s attention or out of anger. However, they quickly correct their behavior if the situation is worked out in their favor or is dealt with appropriately.

Let me warn you, these are very loud birds! Aside from mimicking pretty much any sound they like to copy, scarlet macaws make a variety of low-pitched sounds including squawks, screeches and screams that can carry for up to a couple of miles (even your avian vet will hear Polly’s screams a couple of miles out). Out in the wild, these vocalization helps them to make their presence known, call to their groups and locating potential mates. 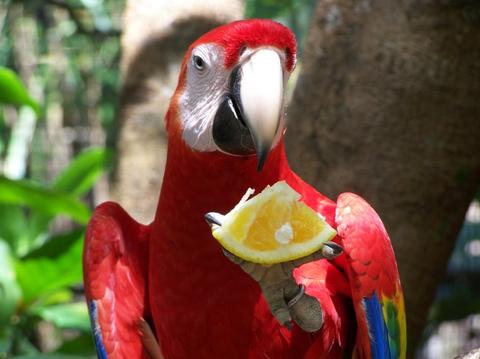 Like all birds, the scarlet macaw will flourish in an environment where they can freely move and roam around, and will suffer in a cage that’s too small for its size.

This bird is known for self-mutilation when confined (not like the Japanese hara-kiri, but more on plucking away their own feathers, just imagine how painful is that for a bird), and will not do well with an owner who confines him on his cage pretty much all the time and has no plan of letting him go out for a sufficient out-of-cage time.

Large bird swings and bird toys inside his bird cage or bird aviary are a necessary, too, because the scarlet macaw is an active bird that needs stimulation for both his mind and body, like playing and chewing on anything that he finds interesting. If not given the opportunity to chew, it will become quite unhappy and may turn the chewing onto its feathers. (if you would like to know where to find good bird gear for your pet scarlet macaw, you can check aviariesdepot.com.au for they have a the things available which your bird will truly love). 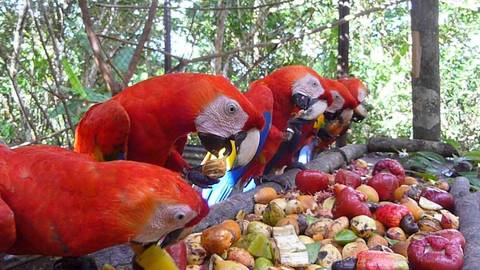 Since scarlet macaw’s diet consist of nutritionally balanced mix of fresh fruits, vegetables, nuts and healthy treats. Leafy greens, as well as a wide variety of vegetables, are crucial in keeping these magnificent birds feeling good, active and in tip-top shape.

Diet plays an enormous part on the health of a bird, so limit the seed as an all-seed diet is extremely unhealthy and can lead to all kinds of health issues (just simply use seeds as rewards a reward for your pet if you are planning to train him in doing basic tricks or just give it as a treat every now and then).

The Chop Concept is a healthy and convenient way of ensuring that they get the leafy greens, root vegetables, healthy grains and high calcium greens they need for optimum health, although scarlet macaws have powerful beaks and can do a quick work on those bigger-sized cuts.

It is also safe to give your scarlet macaw some healthy table foods such as boiled eggs, cooked beans and corn (on the cob of course), cooked brown rice, bread (whole-wheat bread is very good for them), cooked pasta, and also grilled, roasted or broiled poultry or fish. See also: Foods and Treats For Bird. 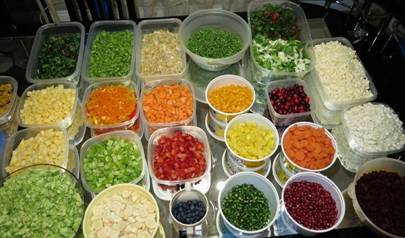 You can also add bird food that is specifically made for parrots and comes in pelleted form on your pet bird’s diet to ensure that he has all the nutrition he needs to keep healthy and strong. Giving your pet frozen peanut butter balls or bonbons are also a great form of treats for them. 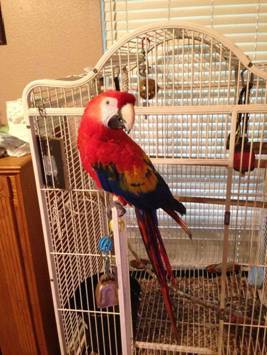 Let your scarlet macaw go out of its cage at least 2 hour a day to stretch their muscles and play. To avoid your Scarlet macaw from escaping, it is ideal to bird-proof your house and always keep the doors closed (much better if your doors have spring hinges that makes it close automatically).

Also keep your parrots away from the kitchen, especially near the stove, oven, microwave or the refrigerator (you don’t want a medium rare scarlet macaw, neither a parrot-cicle, right?).

To keep them away from small things around your house that can be a potential danger to them if ingested, give them toys such as hanging chew toys or even a rugged rope tied at one end to form knot, which is a great DIY chew toy for them to exercise their powerful beaks and jaws. 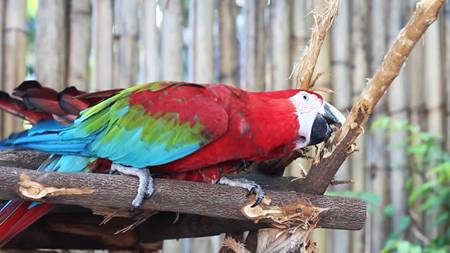 Scarlet macaw ownership typically pose multiple challenges, such as excessive or compulsive chewing - particularly at certain stages in their life.

They do discover their beaks as method of “disciplining us” once they are out of the “baby stage” and they can, in most cases, be somewhat naughty and misbehaved, and it is absolutely important to learn to comprehend them and to guide their behavior before an undesirable behavior has been settled in their habit. Undisciplined macaws will chew on electric wiring potentially causing house fires (and a crispy macaw).

They consider anything in your home as a “toy” that can be explored and chewed on; ruining important items that you may hold dear (such as important documents left on the table or your kid’s homework) or are simply valuable. 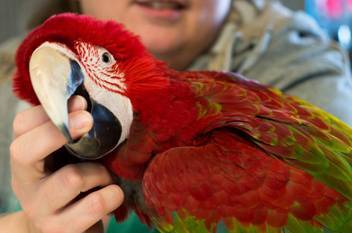 Even a young bird that has not been neglected and abused requires proper guidance; this becomes even more challenging when it involves a rescued bird that may need rehabilitation.

Not all people can endure the natural loud call of a macaw and even though it can’t (or should not) be totally eradicated, there are ways to discourage screaming / screeching in your pet macaw.

Overall, it is important to guide parrot behavior, but even more so if your feathered family member is a magnificent and powerful macaw. 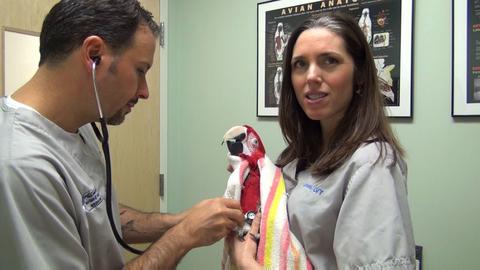 If you suspect that your scarlet macaw may have one of these diseases and is showing symptoms. Consult your local avian vet right away to provide medical examinations and a cure for that disease. It is also important to do a routine check-up with your avian vet at least twice a year to make sure that your pet bird is always healthy and in top condition.

Just like other parrots, scarlet macaws need a considerable amount of attention and care, and also patience from their respective owners. Once all these conditions and responsibilities are duly met, one can expect that they will have an awesome, smart and beautiful companion for the years to come.