The Mini-Macaws: Full Macaw Personality in A Small Package 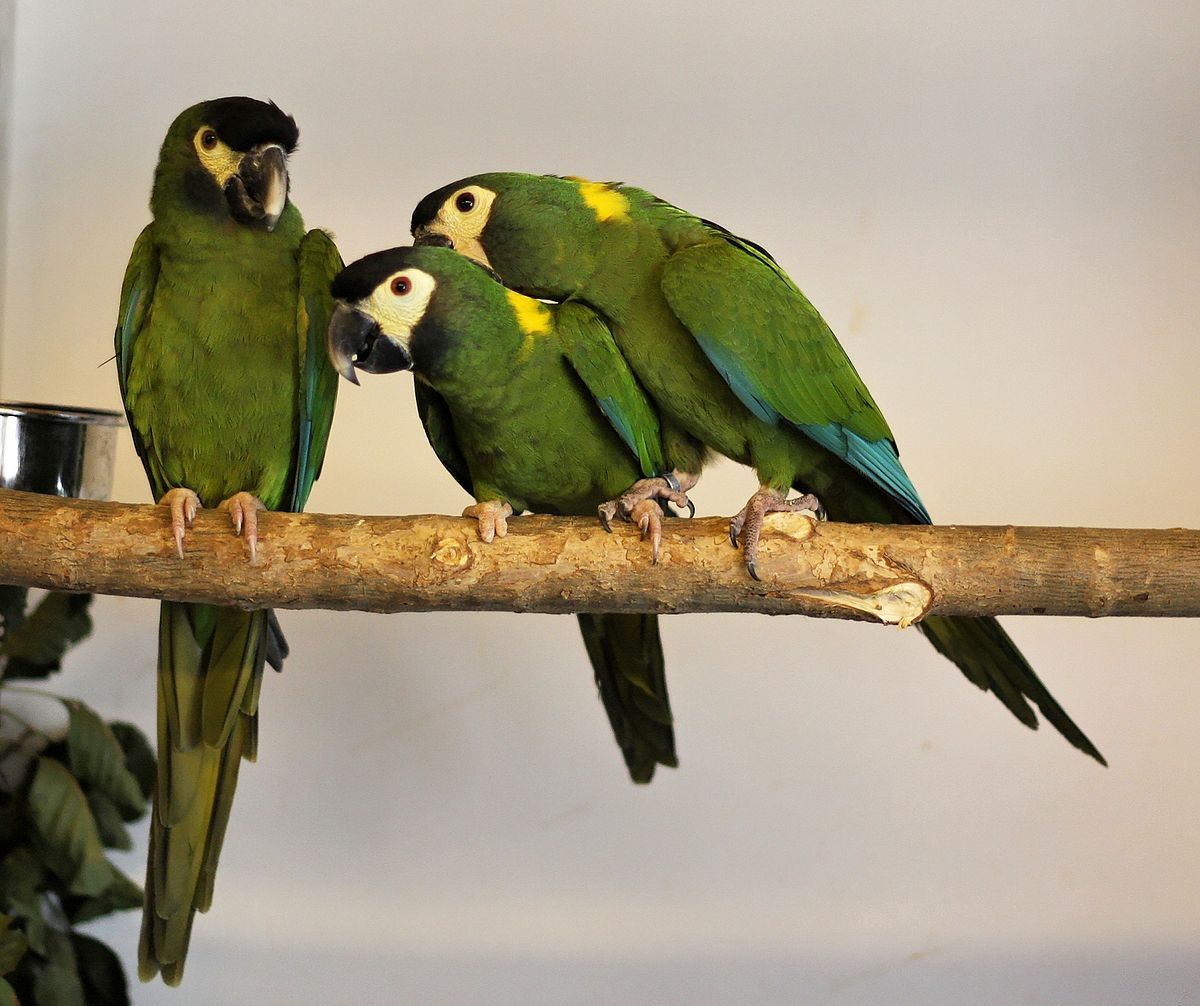 (Pretty much anything about the Mini Macaws)

Mini Macaws are like large Macaws… but obviously they are much smaller, easier to care for, and tend to be better talkers! These small Macaws are called Mini Macaws and just like their other larger cousins, they are also curious, playful and full of guts (And of course they are most likely adorable too). They are also very intelligent and trainable, which makes them a very enjoyable pet.

If you want a Macaw, but are a bit taken aback by the enormous size and the powerful beak of a full sized Macaw, the Mini Macaw is perfect for you. They take up less space and are easier to care for. They are also quite comical and can also be better at mimicking human speech. The life span of the Mini Macaw is shorter however, on the average they will live about 20 - 30 years. (30 to 20 years is a fairly lengthy time if you think about it).

A smaller version of the large Macaw, Mini Macaws are very charismatic and energetic. They are not so big or vividly colored but like their larger relatives, they are avid chewers and can be very loud too. They also need lots of room with plenty of activities and playthings such as bird toys. The Mini Macaws can make wonderful pet birds if well socialized when young. Depending on the species however, some will easily retain their amiable personalities than others.

(They may be small but these Birds sure are a handful) 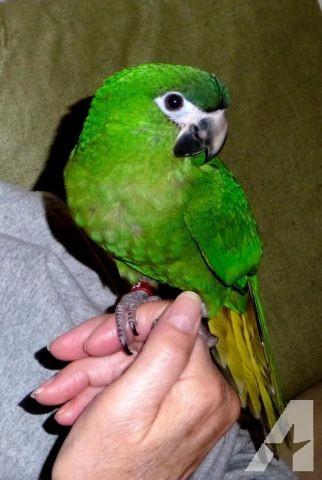 If you’d like to have a mini macaw for a pet, you should know that the only small thing about these parrots is their size. Personality literally oozes out of these birds, so potential owners need the right stuff to be able to keep up with these little guys.

Mini macaws need lots of interaction from their owner, along with plenty of toys and an abundance of space. These intelligent parrots easily bond with their owner and can be depended upon to eventually mimic what you say and movements you make. Getting a Mini Macaw as a pet is a big lifestyle commitment and shouldn’t be taken lightly.

Plus they usually live quite a long time for a bird, so that’s a significant commitment. They also require a proper aviary if kept outdoors, or a good sized cage when kept indoors with regular outside playtime for exercise and to prevent boredom. That means regular interaction and lots of soft chew toys. The length of their lives, along with their necessary bird care, means keeping a pet Mini Macaw requires a substantial investment of time, money, and space. Find out all you need to know about mini macaws – the species, how to care for them and what it takes to be a good mini macaw owner.

Did You Know That…

An important question, that is often misconstrued, is how long do Macaws live. The answer is rather surprising when considering they are some of the larger parrots. The actual Mini Macaw lifespan is between about 20-30 years in a good environment. The average lifespan of their larger counterparts, both large Macaws and large hybrids, is between about 35-50. These parrots are easily outlived by the cockatoos, and by medium sized parrots like the Amazons.

Each one is different from the other and has different color combinations in its plumage.

However, none of these are very appropriate pets for various reasons.

When left to their own devices you’ll see them hanging, climbing and swinging on whatever bird toys may be available to them. They simply love playing with almost anything imaginable, so you’ll have an unending variety of items available to you to use as bird toys, without even having to buy any from the pet shop. Checking online is a good start if you are searching for a suitable toy, such as these ones on aviariesdepot.com.au.

They also generally love bathing and seem to quite enjoy taking a shower with their humans – (provided the water isn’t scorching hot of course!) If you don’t want to share your shower you should definitely make sure to give those baths regularly or just buy them their very own Bird Bath (like this one: SPI Home 33562 Curious Cat and Bird Birdbath on Amazon) . Otherwise they’ll use their water bowls and do it themselves.

(Don’t be confused, we might look the same, but try to look closer..) 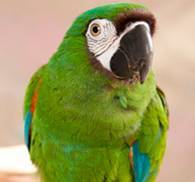 They are the largest specie of Mini Macaws. Some authorities include these macaws in the group of “large macaws”; however, since their body length is 20 inches (50 cm) or less, this species meets the size requirement of mini-macaws.

They are about the same size as African Greys, but have a more slender body structure. They are said to bond quickly with their new owners and respond quickly to training, but need adequate socialization to remain friendly.

They look a lot like a Blue Crown Conure with a red patch on their shoulder. They are generally green with blue on their forehead, a white bare patch around their eyes and a dark gray beak. At 12 inches long, the Hahn’s macaw was entitles as the smallest of all true macaws.

Intelligent, charming and easy to care for, Hahn’s macaws have recently exploded in popularity as pets. One look at these little guys says it all, Hahn’s macaws are adorable.The Noble Macaw looks and acts the same as the Hahn’s accept the upper mandible is orange-yellow colored. 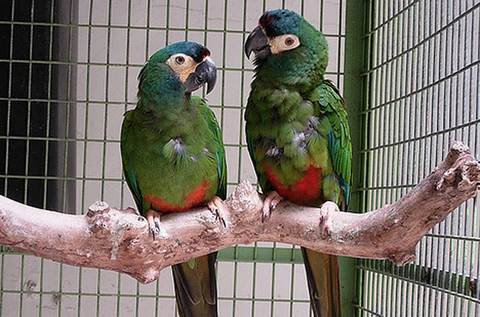 They are playful, friendly birds that enjoy human interaction so much. When hand-fed as babies and raised in loving, attentive homes, these intelligent birds bond strongly with their owners and quickly respond to positive training techniques.

They require a lot of mental stimulation and they like to stay busy, so an Illiger’s macaw is not for owners that don’t have plenty of time to spend with their pets. They are small, around 16-17”, Their plumage is mostly green with the forehead and sides of abdomen and lower back orange-red to red.

The crown is blue; the head, nape, and cheeks are greenish-blue; the wings are blue with blue primary-coverts and bluish-green edges; and the under wing-coverts olive-green. The tail feathers are blue with reddish-brown tips and olive-yellow underside.

Females have less red coloration than males. Their typical Macaw naked facial patch is lightly striped with very fine feather lines, and the iris is orange-brown. The bill is black and Illiger’s Macaws have flesh colored legs.

Immature Illiger’s Macaws have paler plumage than adults, less red on the forehead, and horn colored edges to the bill. They are a medium noisy bird with a loud shrill call that some people cannot take. They do best in a multi-bird household if the owner will not be able to spend a good deal of time with them. (Please keep in mind that they live 50-60 years.) 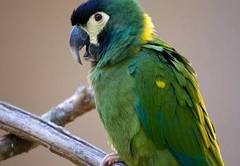 Affectionate, but somewhat mischievous, the 15-inch long yellow-collared macaw has a reputation for being an intelligent and resourceful little parrot. They thrive on attention from their owners, and like other macaws will seek that attention by any means necessary.

Finding Mini Macaws for sale is not so difficult for some of their more familiar species. But not all Mini Macaws species are available, and there are some that have limited availability.


Here is a breakdown of which types of Mini Macaws you can readily find for sale, and those that are more difficult:

These species have long been the most popular species of the Mini Macaws and are the most readily available birds for sale:

Mini Macaws that is occasionally available for sale:

These Mini Macaws have been a bit rarer in the world of pet trade. They are sometimes available and with increased breeding are becoming more common. You can generally find these Macaws for sale, but it may take a bit more searching:

Mini Macaws that is not usually available


These Mini Macaws are (obviously) does not exist in the pet trade. 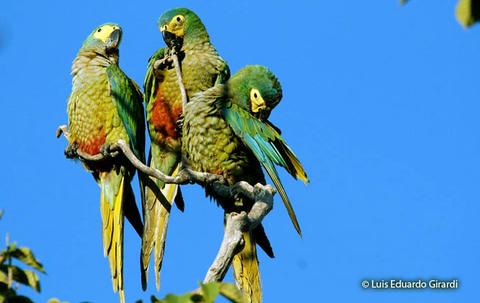 They are a very nervous bird and studies found that it has a highly specialized diet as well as being extremely difficult to breed. Today it is very scarce in captivity. Finding this Mini Macaws for sale will be even more difficult. 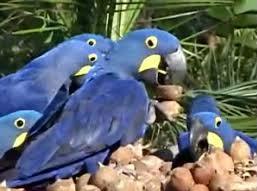 Owners should provide no more than 80 percent of the Mini Macaw’s diet with quality Bird Foods.(Top quality pellets). Provide your mini macaws a healthy diet such as bird foods that are organic and no artificial vitamins.

This is important if you have a bird with allergies. The other 20 percent of their diet should consist of some seed blend along with dehydrated or fresh colorful vegetables (Such as beans, rice and some fruits), again preferably organic.

Remember that the chemicals sprayed and fed to plants have to be cleansed by their tiny kidneys. So, remember to always choose the ones that you completely trust and healthy. The health and well-being of your Mini Macaws is at your hands.

Just keep this in mind: Never give your parrot alcohol, avocado or chocolate - these can kill your parrot! Also avoid asparagus, eggplant, cabbage, caffeine products, junk food, milk and cream, raw potato, and rhubarb (including the leaves). For more ideas about their diet, you can also check this article: Foods and Treats For Bird

We are in Danger 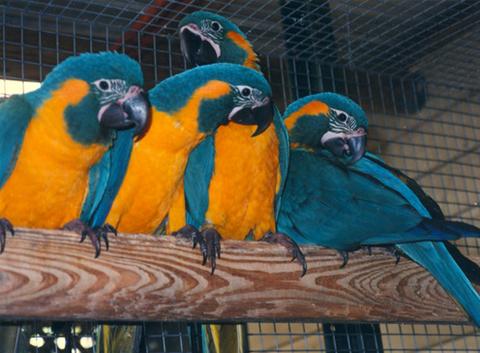 Several of these Mini Macaw species are very popular pet birds. However, because of the increasing pressure on their native habitats and decreased populations, Mini Macaws are at risk in the wild. Fortunately there are many devoted breeders of the favored Mini Macaw species, so they will likely continue to be regularly bred and available.

Conservation of Mini Macaws has become vastly important in the fight to preserve endangered birds. Captive breeding, care, and good management of captive birds are part of this. Through the dedicated efforts of aviculturists a strong, self-sustaining population of these endangered birds is available in captivity. It is because of the efforts of these people that some of the Mini Macaws, Large Macaws included, will survive extinction, and/or will be available for re-introduction into their natural habitats. These efforts have already allowed for some species to be re-introduced to their native homes, though this is still in the experimental stages. Learn more by visiting: Bird Care.

Mini Macaws in their Natural Habitat

Today there are eight living species (including their subspecies) of Mini Macaw, but not all are available in the pet trade. All Macaw species have diminished Populations declining in the wild has affected all types of Macaws, and all Macaw species are now considered endangered birds, vulnerable, or of concern. Currently there are no populations considered stable enough to not be considered at risk or endangered

Mini Macaw species are very popular as pets. Fortunately there are devoted breeders of Mini Macaw species which helps in the continuing effort to preserve the species and making them available as pets. The Yellow-collard Macaw and the Hahn’s Macaw are the most popular in the pet trade, followed by the Severe Macaw and the Illiger’s Macaw. The Noble Macaw and Blue-headed Macaw, though available, are rarer. The only Mini Macaw that is not really found in the pet trade is the Red-Bellied Macaw. Though at one time it was a common import, it is no longer available. This species has a highly specialized diet and is incredibly difficult to breed, so is now extremely rare in captivity. 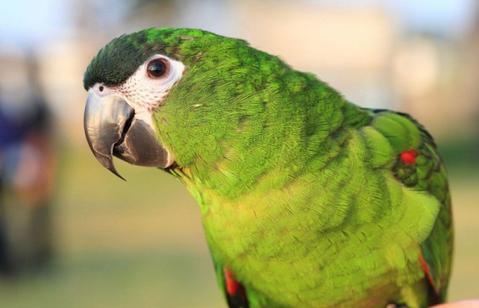 No matter what species of Mini Macaws you have, (or just planning to have) always remember that their health, happiness and their well-being. After all, these birds are and will always be a great companion, so just take good care of them for the both of you to have a great and harmonious time living together.