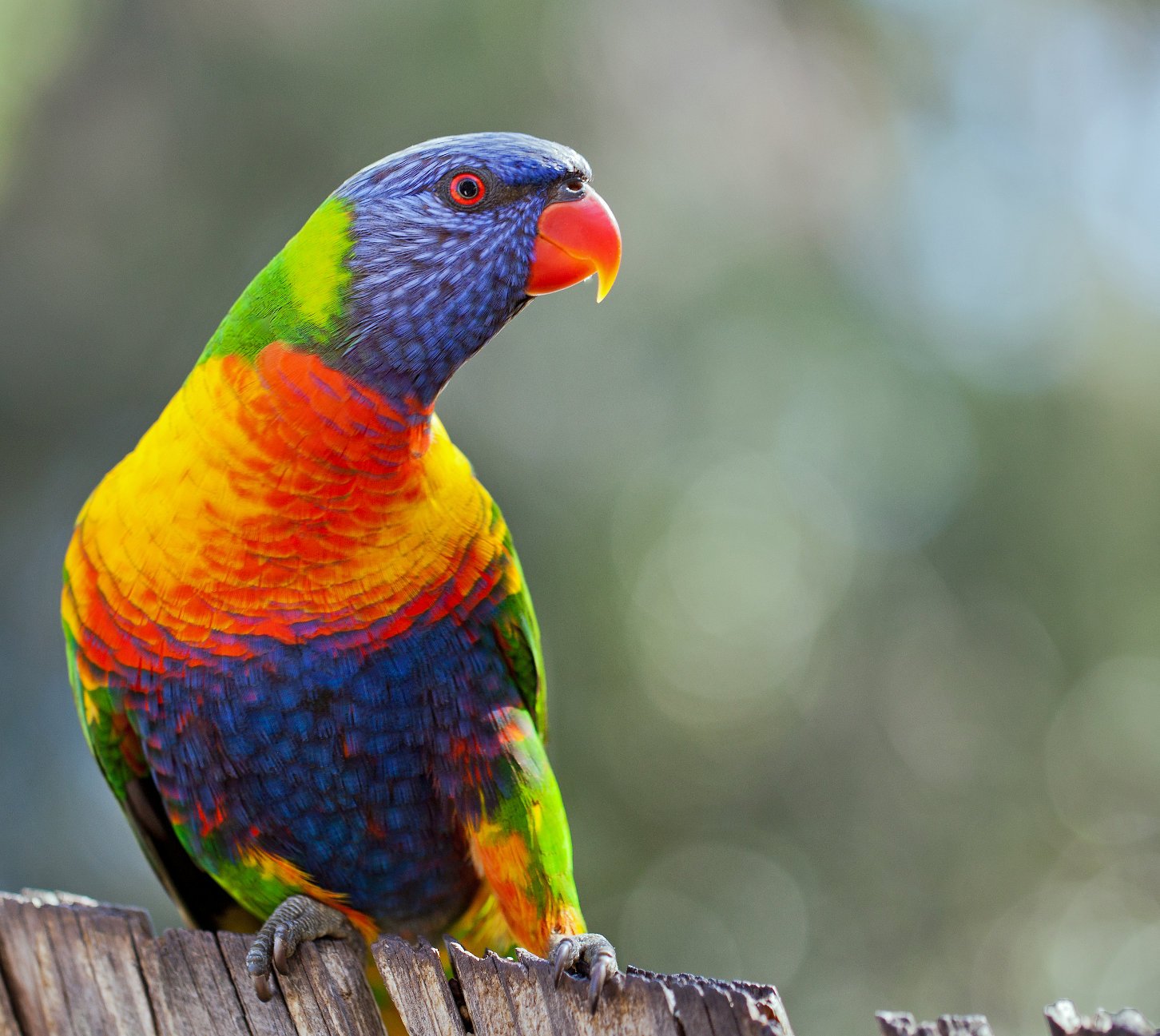 This is what happens when a rainbow and a normal Lory have a lovechild. Rainbow Lorikeets, or also known as Rainbow Lories (Trichoglossusmoluccanus) beautifully colored birds that happen to be one of the most sought-after smaller pet birds out there, not just because of their striking colors, but also their great personality.

There’s a reason why there is the word “rainbow” in their name – their faces and bellies dons a deep blue plumage, with green feathers on their wings, backs, and heads. They have bright red chests gradually goes down to a yellow and orange hue on the sides. Their bright red beaks offset nicely against the blue of their facial feathers, and they have dark, slate gray skin on their feet. They are simply one of the most dazzling species kept as companion birds. (They look like a kid in art class who accidentally toppled down a cabinet of different paints though, in a good way of course.)

The Rainbow Lorikeet is a native of Australia and nearby Indonesia. In Australia, it is usually thrive along the eastern seaboard from Queensland to South Australia and Tasmania. It lives in the rainforest, in coastal bush and forest areas and has been introduced to Perth as well as in Auckland, New Zealand and a far away as Hong Kong. 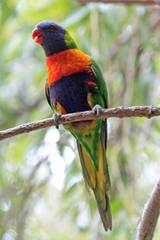 Lories and Lorikeets belong to the tribe called “Lorini”; the sizes of these birds are commonly tiny to average. They are arboreal parrots that dwell in trees and they have this special tongue that is tipped like a brush that helps them in gathering nectar from different kinds of soft texture fruits like berries and flowers.

Here are also some amazing facts about these pompous birds: 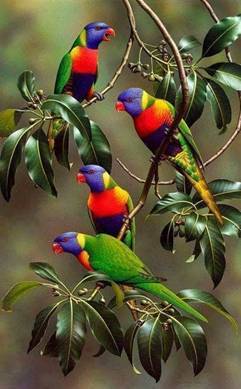 In New Zealand, feral Rainbow Lories compete with native bird species for resources and their capture is encouraged. (Off to New Zealand we go!)

It’s hard to tell the gender of Rainbow Lories by sight as there are few obvious differences between males and females. (you will need the help of an avian vet for this, for they can check the gender by using DNA test from their feather or poop)

Rainbow Lories are monogamous birds and mate for life. (you can’t easily find loyal guys such as the male Rainbow Lorikeets in the animal kingdom) 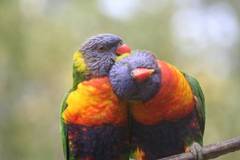 Rainbow Lories can feed in flock sizes that vary from at least 50 birds to more than 1,000 individuals.

In the wild, rainbow Loriescan be very aggressive towards other birds that are competing for the same food and nest resources.

The Rainbow Lorie’s diet in the wild consists of nectar, pollen, fruits, berries, and blossoms.

Because they eat soft food & liquids, rainbow lories have tiny hair-like appendages (known as papillae) on the end of their tongues, giving it that bendy pipe brush appearance

The Trichoglossus part of rainbow lorikeet’s scientific name is derived from Ancient Greek word Tricho, which means hair, and Glossa, for tongue.
In captivity, Rainbow Lories can eat commercial nectar and pollen substitutes.

Rainbow Lories eat a lot and have a relatively short digestive tract, which means frequent droppings and more clean time.

Due to the high moisture content of their diet, Rainbow Lories will produce loose and projectile droppings. (don’t even imagine it now, for you will definitely encounter it once you own one)

Rainbow Lories are smart, sassy and loud just like their other parrot cousins, but they are not known for their ability to mimic human speech. 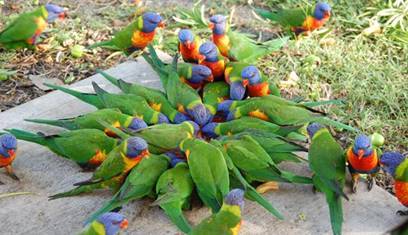 In captivity Rainbow Lories can get bored and need a large cage or play area so they can hop and play with bird safe toys.

Rainbow Lories are hardy birds and can live 10 – 15 years with proper care in captivity.

Good hygiene is vital to the health and longevity of Rainbow Lories in captivity. (Remember the droppings earlier?)

While the Rainbow Lorikeet has naturally developed a steady following in pet-keeping circles, it is important to comprehend that this mid-sized parrot has some very distinctive requirements in captivity. For some people these conditions and obligations will be of no issue; for others, however, these requirements may make them change their minds and abandon their plans of owning one. 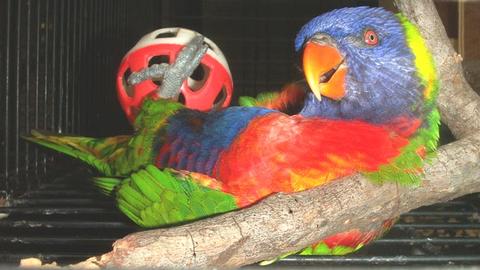 The Rainbow Lorikeets are known to have this intense personality. They are very proactive compare to other species in the parrot family. The Rainbow Lory is lively and very enthusiastic, and always asks for playtime whenever its favorite human is around (it’s no surprise that these small bubbly birds are always on sugar rush, for their main diet is nectar). These birds are constantly busy and energetic, allowing little time for rest. Their antics are exceedingly entertaining for most people, but they tone down their behavior for someone that’s used to a more laid-back companion.

Playtime is crucial for the Lory, and the Rainbow will take great delight in having it’s time out of the cage to spend with its owner. This need should be taken care of as often as possible. A Rainbow Lory that’s left alone most of the time will acquire behavior disorders and may begin to self-mutilate (plucking off its feathers especially around the chest and back areas). See also: Birds Being… You now 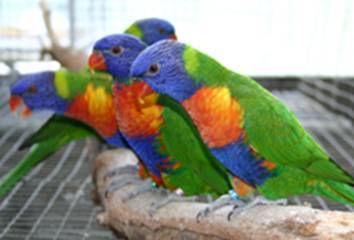 Always remind new guardians to be very attentive and be always on the lookout when the bird is out of the cage, however, because this active bird is most likely to be mischievous and troublesome, and will get into trouble quicker than someone can save it from harm. Because this bird is so excitable and intelligent, it is also often nippy, and will usually bite only out of excitement or fear (especially when playtime is over and it is being put back into the cage!).

Aside from their playful and rowdy behavior, Rainbow Lories can be noisy too, their voice is high-pitched (which sometimes make my hairs stand up to its ends) with a squeaky screech and repetitive squawks. They are wonderful talkers too just like their other parrot cousins and will learn many words and phrases, learning to speak them clearly and often, though the Rainbow Lory in particular isn’t the best talker in the family.

There are two main options that you can choose in picking your Rainbow Lorikeet’s dwelling.

For keeping more than two Rainbow Lorikeets, Purchase a Bird Aviary - Build a DIY bird aviary or purchase one with an aluminum structure as large as you can find (just like this one on aviariesdepot.com.au). Place the aviary on a concrete slab that slightly slopes on one side (preferably sloping down to a small waterway to where dirty water can flow out). This will make it easier for you to hose down the interior of the aviary. Generally, aviaries should be about 6 feet by 6 feet by 6 feet (1.8 m by 1.8 m by 1.8 m) but will still depends on how many birds that you have. 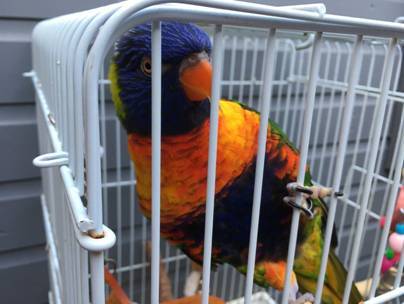 Either a small bird cage or a large bird cage (it will still depend on the number of your birds) - Small bird cages should be at least 2 feet cubed (.6 m). If the cage is any smaller, your lorikeet won’t do well and will likely be upset. In addition, if you do primarily house your lorikeet in a small cage, make sure it gets time outside in your home on a daily basis

For large bird cages are great if you want the portability of a small cage with the spacious interior of an aviary. Large cages can be 4 or 5 feet (1.2 to 1.5 m) cubes or even larger. You can keep large cages inside or outside the house, which is an added plus. The benefit of a large cage is that (if you don’t have an aviary) your lorikeet will have a lot more space and a better chance at moving around.

You also need to add bird perches, bird toys and bird swings inside the cage so that your lory won’t be bored. It is also essential to put a bird bath inside the cage or aviary where your bird can splash in for a cool bath. Avoid housing lorikeets with other birds for they do not get along with other birds. They are territorial and can sometimes be violent toward other lorikeets. They’re often very aggressive toward birds of different species. Because of this, never leave your lorikeet unattended with other birds. 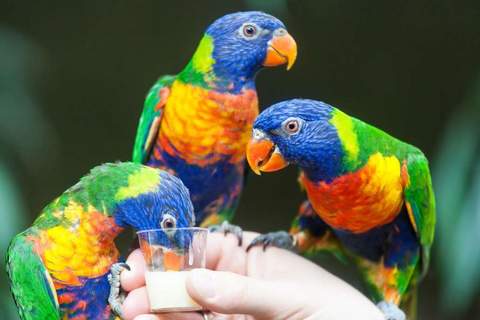 One of the main reasons why Rainbow Lorikeets and Lories are unique compared to other birds is their diet. Lorikeets are naturally nectar feeders. In the wild they feed on the nectar (pollen) of native flowers such as bottle brush and grevilleas (Spider flowers) using their brush-like tongues. They will also feed on berries and fruits such as:

Aside from fruits, they also like greens such as celery sticks and lettuce leaves. There is also a specially-made bird food (both dry lorikeet food and lorikeet nectar) available for them in some pet bird supply stores. If you can’t find any lorikeet food around, you can make your very own homemade lorikeet nectar or lorikeet dry food by just following these directions: 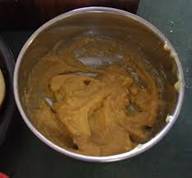 Mix together 4 cups of water, 1 tbsp. of pollen (they are sold at flower shops so don’t worry), 1 tbsp. of honey, 2 cups of high-protein baby cereal (such as Cerelac), 1⁄2 tsp. of calcium carbonate, and 1⁄2 tsp. of multivitamin powder and 1⁄2 cup of powdered skimmed milk into a somewhat watery mix.

When it comes to feeding time, feed each bird a melted nectar ice cube every day 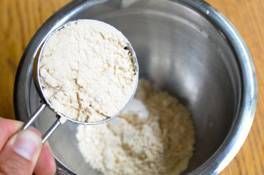 Store the dry food blend in airtightcontainers, and keep refrigerated.

Keep the dry food blend constantly available to your bird. See: Foods and Treats For Bird 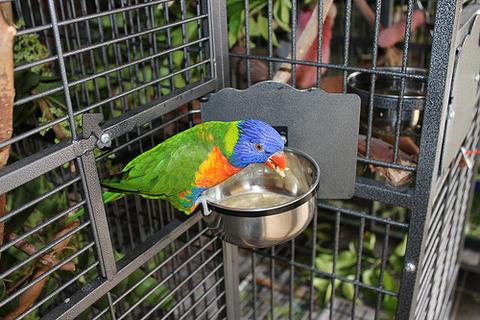 Cleaning the cage is fairly easy due to that their droppings are mostly wet (you can just hose it out or clean it with running water and soap), but sometimes, these droppings can be seen in appropriate areas (such as the sofa, the coffee table, or pretty much anywhere else) especially after your pet’s playtime outside it’s cage (and these droppings are very hard to clean off, most notably if it is on fabric like clothes or the carpet).

To avoid that, many owners line their walls with plastic sheeting to protect their walls due to the fallout resulting in their bird’s highly specialized diets. Thankfully, Rainbow Lorikeets are very intelligent birds, and can be easily “potty trained” if an owner so chooses. Check this also: Birds Proper Hygiene 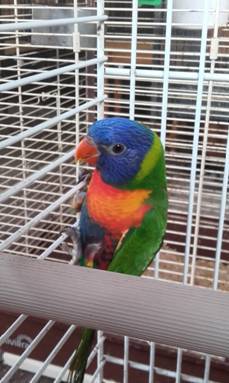 Rainbow Lorikeets, as mentioned earlier, are very active and playful birds that demand a lot of your attention.

Make your bonding times more fruitful by having your bird play outside of its cage (of course’ with your involvement too) for a couple of hours a day to ensure that your Rainbow lorikeet will always get the chance to stretch up its wings.

Always remember, a happy Lorikeet is a healthy Lorikeet and will stay that way for the rest of its life…