Meet The Lovebirds And It's Other Genera 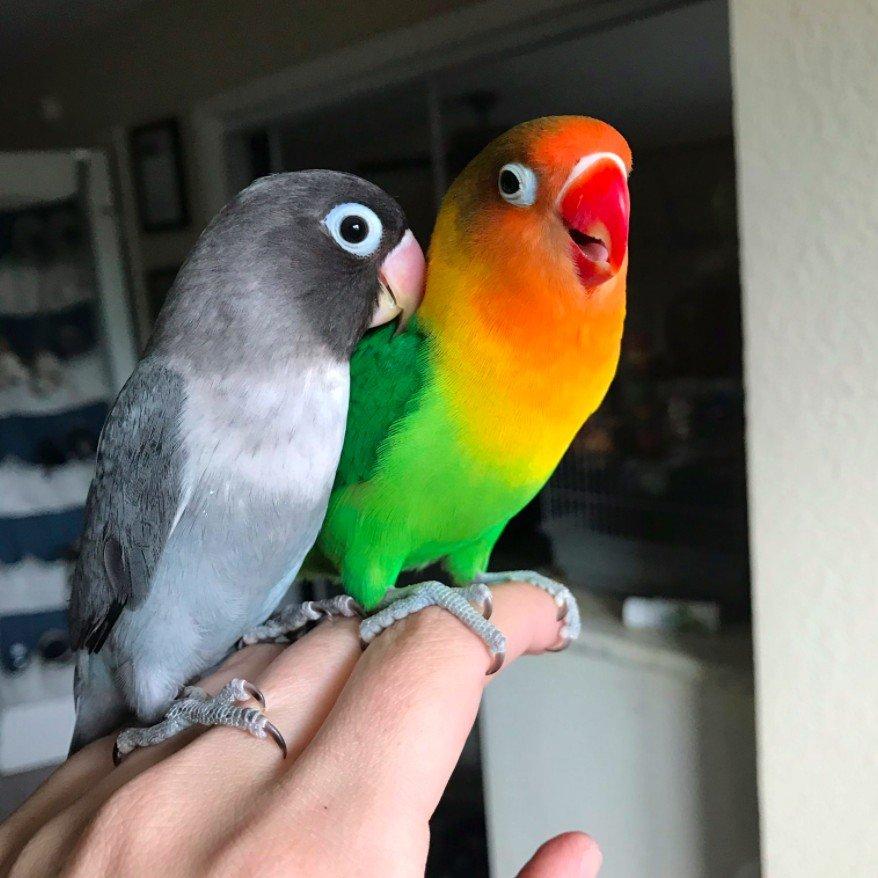 Lovebirds are awesome pocket-sized pet birds full off character. They have the charisma of a full-sized parrot packed in a pint-size package. Lovebirds are mini jesters, playing for pretty much all the time they are awake. They love to hang around the house, swing around on where they perch like a trapeze artist, and sometimes dance on your shoulder or peck you while sitting on top of your head. They have that penchant of pecking and hiding little things that piques their interest, such as your jewelry, the buttons on your shirts, or everything intriguing and small enough for their tiny beaks to lift up and carry. More about your feathered friends at Bird Breeds.

Despite their diminutive size, they are very active and pretty much anything they do will always get your attention. They are also know to be very cheerful and it is evident on their face and of course, in their actions. They have that aura in them that radiate happiness and joy to your home and to everyone else around.

Curiosity is one of their distinguishable trait, to the point that they act like toddlers on a playground. They would perch up on their birdie house, wrestle with their toys in such a child-like manner, hang and “crawl” around their cage using their two tiny legs and using their beaks as a third limb or hand. When there isn’t anything interesting around, they tend to get bored and are likely to chew on any clothing and jewelry that happened to be around, and pull off buttons.

To keep them busy and away from things they tend to destroy, you need to give them enough attention or get another Lovebird of the opposite sex as their mating partner and playmate.

Lovebirds is the common name of Agapornis, from the Greek word agape, which means love, and ornis, which means bird. There are eight species of lovebirds and they are all native to the African mainland, and one which is endemic to the island nation of Madagascar, the Grey-headed Lovebird.

Most lovebirds in Africa are found in the central regions and areas which are close to the equator where they thrive on the hot and dry climate of the tropical and subtropical grasslands, savannas and shrublands biome.


Here are the Nine Species Of Lovebirds: 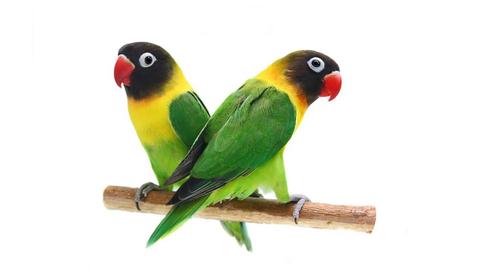 Also known as the masked lovebird or eye ring lovebird, and is mainly green small parrot about 14.5 cm (5.5 in) long.

The color gradient is darker green starting from the upper part of its body to lighter green to the rest of its body.

It has a black-colored head, and it has a bright red beak and white eye rings. It has a yellow neck that goes all the way to its nape and shoulders. 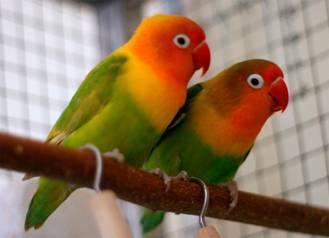 This lovebird variant has a golden neck going upwards to its redish-orange face, giving it it’s peach or mango coloration. It’s forehead to its head yellowish-green hue. The upper surface of the tail has a number of purple or blue feathers and it has a white circle of bare skin (eyering) around its eyes.

They originated from the area around the south and southeast of Lake Victoria in northern Tanzania. 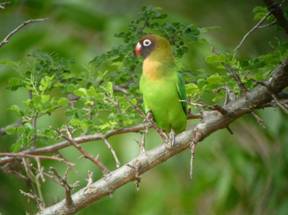 This particular lovebird grow as much as 14 cm (5.5 in) in length. It has a green pumage with mostly green tuft, an umber forehead and forecrown, bright taupe cheeks and throat, tangerine lining below the throat which blends down to yellowish-green, white eye-rings and grey feet. Adult exhibit bright red beaks that fades to white upwards, while young ones of the species are identical but with a more orange bill.

They have a loud, piercing shrieks, which are very akin to those of other lovebirds. It is endemic in just a few areas in southwest Zambia, where it is vulnerable to habitat loss due to human activity. 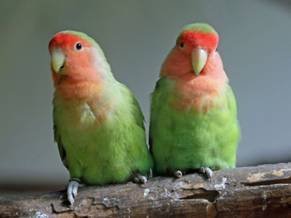 Is a medium-sized variant (according to lovebirds standards) reaching about 17 to 18 cm long and an average wingspan of 11 cm and a tails that reaches a maximum of 5 cm. It has an overall green plumage with a pinkish-orange chest and face, with a darker hue around the forehead and above the eyes. Beaks are ivory colored, dark-brown irises and dim gray feet.

Younger ones have a light pink face, throat and upper chest, a greenish fore crown and crown, and a russet base for their beaks. Coloration is the same for males and females. These lovebirds are native in the Namib Desert and barren areas of Namibia and Angola. 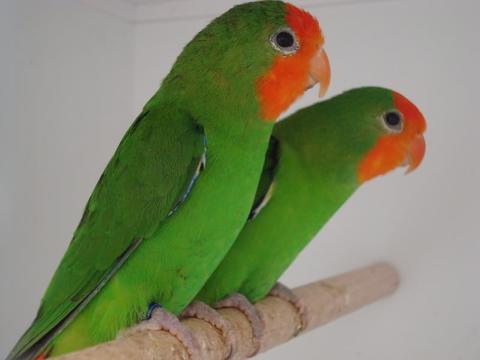 This lovebird have an average length of 15 cm and is mostly green. It has a unique reddish marking on its forehead going down to its chin, covering it’s cheek and extending to the left and right up to the eyelid margins. Like other lovebirds, it has a pair of grey feet and the wing’s underside is of lighter shade of green.

Female red-headed lovebirds have an orange head hue, compared to the more pronounced red hue of the males and adult females have a pale red beak coloration compared to the deeper red coloration of the males. It is endemic to a wide range of countries in Central and Equatorial Africa, such as Angola, Cameroon, Democratic Republic of the Congo, Equatorial Guinea, Ethiopia, Ghana, Guinea, Kenya, Nigeria, Rwanda, Sierra Leone, Togo, and Uganda. 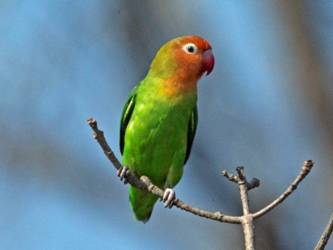 A smaller species of lovebird that reaches around 13 cm in length. The Lilian’s lovebird is 13 cm (5 inches) long and mainly has a green plumage with white eye-rings.

It has orange on its head, neck and upper chest and has a green posterior. Male and female Lilian’s lovebird are very identical in appearance. The Lilian’s lovebird is often mistaken for the slightly larger Fischer’s lovebird, which has an olive-green hood and a blue backside.

It is also largely similar to the Peach-faced lovebird, which has more clearly distinguished orange coloration, and lacks a white eye-ring. Lilian’s lovebirds are native to a small area in Africa, especially in Malawi, Mozambique, Tanzania, Zambia, and Zimbabwe. 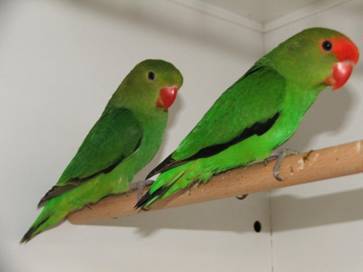 This lovebird has an average length of about 16 cm (6.25 inches) and is known as the biggest of all lovebirds. Males and females of these lovebirds have the different characteristics, same with the red-headed lovebird and grey-headed lovebirds.

These dimorphism becomes noticable in younger birds after their first molt at about eight or nine months of age. Both sexes of this lovebird genus exhibit a mostly green plumage with only the males have a red forehead and eyering. Males also have black-tipped tails and the feathers under the tail have a yellowish color. The backside and feathers above the tail are of light-green hue. For males, the underwing feathers are normally colored black, while females have that typical greenish or brownish black color. Both males and females of this genus have a reddish beak and slate gray feet. 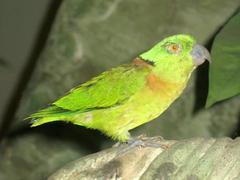 These small lovebirds typically measure around 13 - 13.5 cm in length (5 inches) long (including tail) and weight between 39-41 grams (1.8 - 1.5 ounces). The plumage is mostly green, slightly paler on the head and upper body and back. Its most unique marking is the distinctive black half collar at the nape (back of the neck). The chest is orange or olive-yellow, merging into yellow on the belly. The backside has bright blue and red markings.

They have blue upper tail feathers and the root of tail is red and the feet, legs and beak are grey to black, the beak is black, and the irises are yellow. This lovebird genus is distributed across a wide range in equatorial Africa. Specifically, they occur in the forests of Cameroon, Central African Republic, the Republic of Congo, the Democratic Republic of Congo, Côte d’Ivoire, Equatorial Guinea, Gabon, Ghana, Liberia and Uganda. 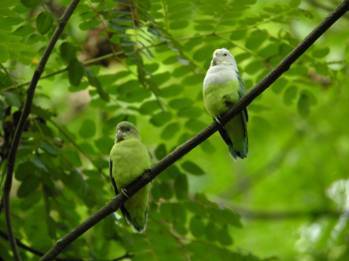 Is one of the smallest species among other lovebird genus, having only 13 cm (5 inches) in lengh and weight about 30–36 grams. Its beak and feet are pale grey. The species is sexually dimorphic, and only males exhibit a light gray head that runs down to its neck and chest with black underwing hue and a green tail.

Their abdomens are yellowish green and underparts are of the same color, albeit darker. Males also have a grayish-white beak and dark brown eyes. Females, on the other hand, have no grey coloration in their heads and are entirely green, with green wing undersides. They are the only lovebirds that are endemic to the island nation of Madagascar.

Many first time lovebird owners have that misconception that it is necessary to buy two lovebirds because they thought that without a mate, a single lovebird will wither away and die of loneliness (I’m all out of love, I’m so lost without you…). Whoever started saying that was either lying or misinformed as lovebirds do just fine all by himself/herself as a single bird as they do in pairs. Learn important facts about your beloved bird, check out Bird Information.

Even though lovebirds do not need another lovebird to share its cage with, it still needs a human to share its colorful life with or else it will wither up and die. Sometimes, other lovebird got their companionship from other sources like bonding with other pet birds (not of the lovebird variety) and other pets such as dogs, guinea pigs, rabbits and hamsters. And never ever introduce your lovebird to your pet cat who is not used to be with birds, or else, your bird will become your cat’s tasty meal. And also, nobody expects them to bond with pet fishes right?

Planning To Get One… 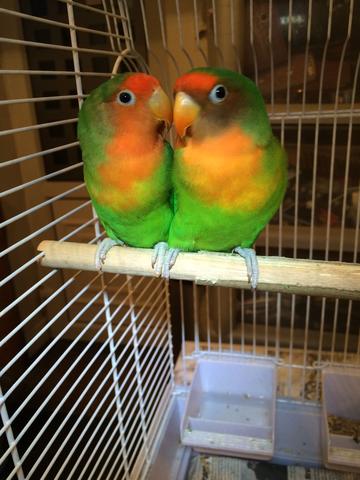 If you planning to buy a pair of lovebirds, then it is natural that they will bond with each other and will look very cute snuggled up to each other’s company. But since they have each other they might not bond well with you.

Having one lovebird means you will have to let him or her out of the cage and play with her to keep her entertained. You will find that your lovebird will want to cuddle and chirp at you because he or she loves you and recognizes you as his or her mate.
See also: Shall I Get a Bird as a Pet

It is important to have a large bird cage ﻿(see: Bird Cage Parrot Aviary Pet Stand-amazon) for your lovebird couple with basic bird cage accessories such as a small bird swing set, a bird platform/perch or a simple bird hammock swing just like the ones available on online pet stores like aviariesdepot.com.au, for they tend to be very active and inquisitive and will continue to play inside their cage after a long playtime outside. Also consider having a small bird nesting box in case mama lovebird gets preggy.

If you have a solitary lovebird, a small cage will do since you will be planning to have him or her spend most of the time outside and use his or her cage for sleeping at night. Always play with your lovebirds so that he or she won’t get bored.

It is also a great idea to invest on a bird chew toy which is light enough for your lovebird can toss and carry around. It is also a good idea to have a mirror toy for your lovebird for they find it very interesting, just remember not to give them full access to the mirror all the time for there is a possibility that a simple mirror in the cage can turn from a joy to an obsession, and he may refuse to leave his cage or move out of the line of sight to the mirror instead of playing with you.

As an owner of a solitary lovebird, always keep in mind that your birdie sees you as his partner, so do all the best you can to satisfy his or her needs. Provide your lovebird a warm and cozy shelter, nutritious food, and all the affection and attention that your birdie needs. This will ensure that your lovebird will love you back and will always enjoy your company.