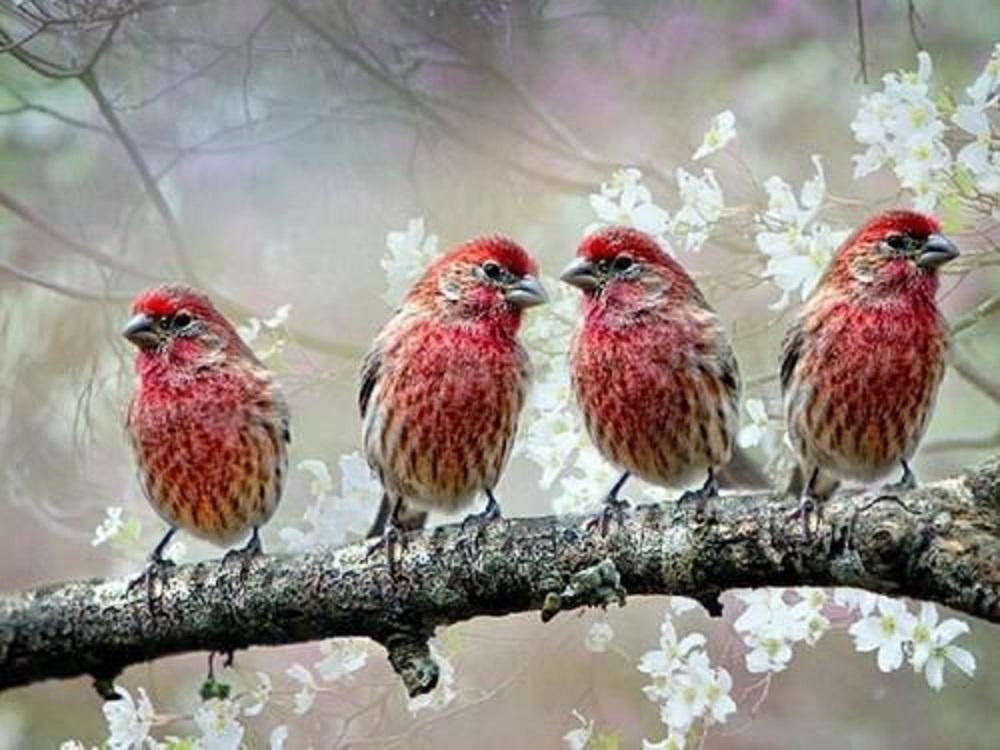 Birds have unique way of responding to humans and getting to know their behavior creates better and wonderful relationship with them.

Our feathered friends live in flocks as they are social animals and enjoy positive human interaction, yet they do not understand the concepts of domination or punishment as compared to other domesticated pets - dogs and cats.

Birds are different from dogs and cats, as dogs and cats are predators and birds are prey animals. Dogs and cats have been domesticated for thousands of years, and to some degree this has changed their genetic characteristics and modified their natural instincts.

Although humans have been keeping birds for thousands of years, it’s only in the last few decades that we’ve really started breeding them instead of having wild-caught birds. So birds have had much less time for genetic modification of their behavior, and their natural instincts are largely intact. In many ways they still have the behavior patterns of their wild cousins.

This has important effects on the way birds interact with us. As prey animals, they have an instinctive urge to be on the lookout for danger at all times. They are easily frightened, and we have to gain their trust if we want them to play with us. There is safety in numbers for wild birds so our birds have an instinctive desire to be part of a flock.

Members of the parrot family in particular will easily form a flock bond with humans. This is what we want, and to make it happen we just have to make our birds feel comfortable with us. The companionship of the flock is very important to a bird’s emotional well- being so our birds need to spend a lot of time with their flockmates, whether human or avian.

One way to gain trust and affection of our feathered friends is to avoid doing things that frighten or annoy them, and engaged on relaxed, friendly interactions with them. Use calm behavior and rewards like food treats to show a nervous bird that you’re quite safe and nice to spend time with. A positive experience with human contributes in building a lasting relationship with these birds. To learn more about your feathered friend Behavior and characteristic visit Birds Being.. You know, Birds. 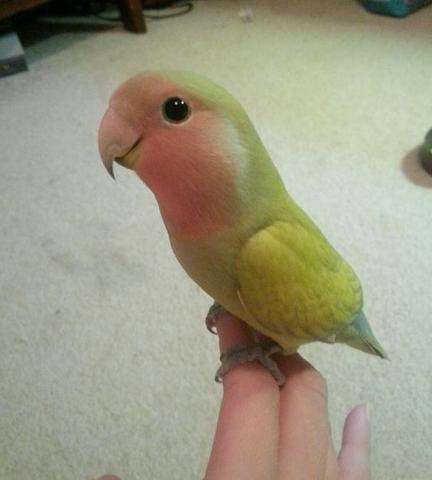 They look at us as their aggressor, and will respond the same way as it would in the wild: by trying to escape from the conflict or by fighting back.

If your attempt at domination is strong enough the bird might even respond as if you were a predator, by flying away in fear.

Your best bet for a good relationship is to be aware of your bird’s feelings and to have a reasonable degree of respect for them.

Birds do not understand the concept of punishment so this method should not be used with birds. Positive reinforcement training methods use positive rewards to achieve desired behavior.

Birds respond poorly when we punish or dominate them .Using these techniques cause more problems than they solve. They have delicate bodies and even a seemingly harmless flick to the beak can break their neck or cause other serious injuries. And that’s quite aside from the emotional damage that a physical strike will cause. It may have taken you weeks or even months to gain your bird’s trust, and this can vanish almost immediately after a physical strike.

This doesn’t mean that you can’t set any limits and have to let the bird have its way all the time. You just have to choose your approach wisely. If there’s an unwanted activity that the bird really enjoys, your best course is to make it impossible for that activity to take place, because you can’t make the bird stop wanting to do it. Visit Bird Behavior to comprehensively learn and understand your bird behavior.

If you ignore a bird that’s chewing up your furniture, you’re likely to end up with a pile of toothpicks where your chair used to be. 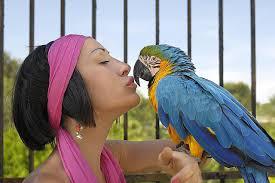 The only way to stop an activity that is fun for the bird is to make it impossible for the activity to take place, because you can’t make the bird stop wanting to do it. If you have something that you don’t want the bird to chew, then keep it where the bird can’t get it.

If the bird has already gotten hold of it, you might be able to distract him with something more interesting. You can also calmly take the item using the least amount of force necessary, since birds do squabble amongst themselves over desirable items. Just don’t be upset if the bird puts up a fight, because this is a natural reaction.

Ignoring works well on behaviors that the bird is using to get something that it wants - for example excessive screaming to get your attention. The way to reduce this kind of behavior is to figure out what kind of reward the bird is getting from it and then remove that reward. In the case of the screaming bird, you would ignore the bird when it’s screaming and pay attention to it when it’s being quiet or making sounds that you like.

Ignoring helps reduce unwanted behavior by making all the fun stop immediately after the unwanted behavior occurs, so keep that in mind when you’re using this technique. It’s best if the ignoring starts within 2 seconds, and it shouldn’t last too long - less than a minute is enough. Look away from the bird. Put it down in a non-fun place if this is practical, and/or turn your back on it. This method is especially effective for single-pet birds. Since birds are highly social and you are her only social partner, the temporary withdrawal of your company has a big impact.


When you change your response to unwanted behavior, the problem is likely to get worse at first. This is called an extinction burst. The behavior doesn’t get the reaction that the bird expects, so the bird tries harder and harder for a while before finally giving up.

Extinction bursts usually last for about three days if you are consistent about ignoring the behavior. Do not give in and pay attention even once, because that will make the problem much worse. This is called intermittent reinforcement, and it encourages the bird to keep on doing it the same way that hitting the jackpot on a slot machine encourages a person to keep on gambling.


Another tactic is to get the bird involved in something that is incompatible with the unwanted behavior. For example, a bird that is busy playing with a toy can’t chew up the furniture at the same time. A bird can’t talk and scream simultaneously.

You can also change the bird’s behavior by making it want to do certain things (or not want to do them, as the case may be). Positive reinforcement training (with or without a clicker) is an effective technique that uses food treats or other rewards to encourage desirable behavior. Unwanted behavior occurs because the bird is getting some kind of reward from it, so the way to reduce this behavior is to find out what that reward is and then remove it. 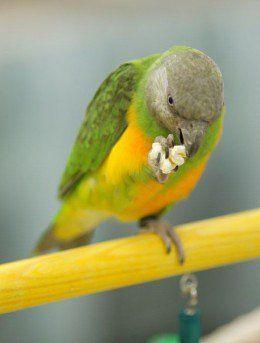 Positive reinforcement training can be done with or without a clicker. The purpose of the clicker (or some other sound used as a “bridge”) is to mark the moment that the bird earned the reward.

If she does something good, you deliver the reward (usually a small food treat). She will know which specific behavior is being rewarded. You can get the same results in the end without a clicker. Positive reinforcement training is a great way to interact with your bird and helps to build a closer relationship.

The technique is simple and complicated at the same time. You start out by rewarding the bird for anything that’s remotely a step in the right direction. After the bird masters the first step, you then shape the behavior by only rewarding actions that are closer to what you’re looking for.

When you’re first getting started clicker training can seem awkward and complicated. We humans are used to teaching with verbal instructions but our birds don’t understand our words. We are NOT used to teaching non-verbally but it becomes much easier as you and your bird get the hang of it.


There are some behaviors that can’t be trained. You can’t teach a bird to act contrary to its natural instincts. 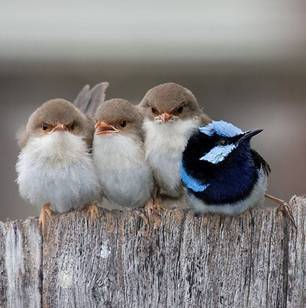 The idea of height dominance used to be a popular parrot-keeping theory. It was believed that wild parrot flocks had a dominance-based social structure, and a bird’s rank in the flock could be determined by seeing how high it sat in a tree.

However, this is not true as studies shown that all flock members are basically equal. Squabbles occur within the flock and birds with aggressive temperament win more fights than the milder birds, however, behavior like height dominance can be observed.

Birds like to be up high because it feels safe, and they resist your efforts to make them come down. They treat you like a flock member trying to take something they want.

Some of these Myths on Height Dominance may be true to some but not present in all birds: 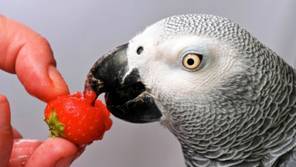 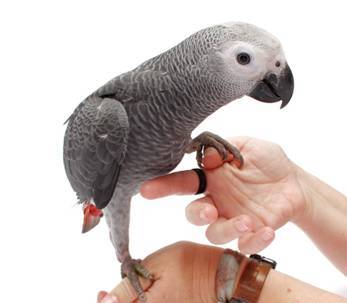 Here are some ideas that can help us understand our feathered pets. Learning their behaviors can help communicate with them and understanding what they need from us.